Overall Equipment Effectiveness (OEE) is a powerful tool for determining sources of loss in a factory and for measuring your progress in Lean Manufacturing. The root of the power is the detail the system allows to examine where loss occurs, and of what variety.

All Time and OEE

The most general view of loss overall is All Time, also known as 24/7 time. While machines will not be running all day, every day, starting at this level is useful because it allows the calculation of Utilization. Utilization refers to the calendar time of production, examining not only how a factory functions while it is running, but also how often it runs in total.

To calculate OEE, however, only the time a factory is operational must be considered. The non-operational time is called Schedule Loss, and is excluded from the calculation. By multiplying the % OEE by the % Utilization, the Total Effective Equipment Performance (TEEP) can be calculated.

The 3 Factors of OEE

Availability Loss tracks any event that stops production long enough that an operator logs a Reason. Reasons are common production-stopping events, often denoted with a number or classification for the sake of efficiency. These events fall into two categories: planned stops and unplanned stops.

Planned stops refer to changeover time, or any activity related to the preparing or adjustment of machines. While planned stops will always be necessary due to instantaneous switch-overs being impossible, particularly egregious time losses in that area can be addressed with Single-Minute Exchange of Dies (SMED) projects. Unplanned Stops include any event where production is scheduled to be running at steady state, but is not. Common reasons for this include equipment failure, or unplanned shortages of material.

Slow Cycles refer to any time production does not achieve ideal run rate (or ideal cycle time) while operating in steady state. This part of Performance Loss is calculated by comparing the Actual Cycle Rate to the Ideal Cycle Rate, which is the theoretical maximum speed to produce a discrete part. This also applies to startup loss, although it is not technically steady state. Small Stops are any pause in production that is not long enough to be given a reason by the operator. An OEE analysis is especially valuable in tracking these inefficiencies, as they would not appear in an operator’s notes.

Quality Loss refers to the time taken to produce defective part, as during that time no value was produced. Because OEE only tracks First Pass Yield, even parts that are reworked and sold to the consumer are still marked as losses. This strict definition allows OEE analyses to be used when considering quality control projects.

Quality Loss can be seen as the final equipment loss due to the fact that even a machine running 100% of the scheduled time at 100% of the possible speed can produce a defective part. Quality Loss may even be a direct result of improving the other OEE factors without forethought. That is why having both the individual view of each factor and the total view of OEE together is important. If a project to target one factor negatively impacts another, it will show in the OEE score.

Worximity is deeply committed to the philosophies of Continuous Improvement and Lean Manufacturing in food manufacturing. Using our IoT technology we provide company wide visibility into the statistics that matter to manufacturers and accelerate TTV (Time to Value) of investments in company culture and training to achieve outstanding productivity. 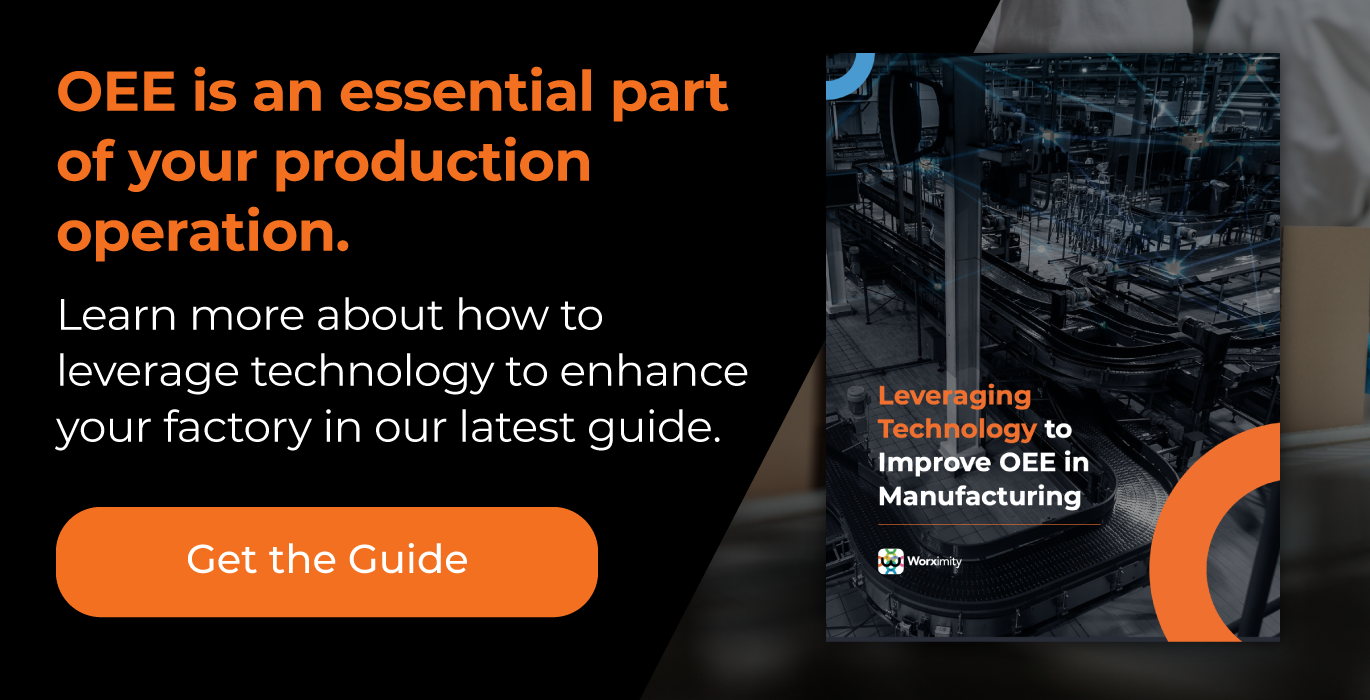